--------
Dear Editor,
This is Dwight Yoder, Rancho Palos Verdes, CA, a Yoder
Newsletter subscriber. In YNL#7 there a front page story about The
Amish-Mennonite Cemetery, Stark County, Ohio. In the story there
is mention of a book in St. Joseph County, IN Yoders by Charles M.
Yoder. He was my grandfather. As a result, I am a direct
descendent of Captain Joseph Yoder and Barbara Yoder buried in
this cemetery.
While in Ohio a couple weeks ago, I followed the directions
from YNL#7, and easily found the cemetery. With the crops
harvested, it is easy to see it up on a rise about 200 yards west of Paris
Avenue. The cemetery is maintained routinely but the headstones are
deteriorating. Joseph Yoder's headstone is now unreadable.
While there I inquired as to who maintained the cemetery and
found the Miller family that lives on the southeast corner of SR 153
and Paris Avenue. Mr. Miller is a cabinet maker. The Millers told
me that a friend had a complete listing of the persons buried in the
cemetery. At my request, they have mailed me a copy of this list. It is
actually a copied record of information on the headstones compiled in
1976.
Since you are, to me, the "keeper of the flame" of Yoder
history; I would like to mail this on to you if you do not have it. As
mentioned in the article, there are not a lot of Yoders in the cemetery.
This listing was prepared about ten years before the Hilles survey
noted in YNL#7, it may have more information than could be read by
the Hilles' in 1985.
The cemetery is officially under the care of the Beech
Mennonite Church located about five miles north of the cemetery on
Paris Avenue. I hope to contact the church to provide financial
support for maintenance of the cemetery. In addition, the church has
published a history I would like to obtain. If I do, I will advise you of
any information of interest I discover.
Finally, I just remembered, my wife took pictures of the
cemetery and some of the headstones. When we get these developed,
we will get digital images along with prints. I will work to put
together a disk with pictures to send to you.
Thank you and all others who work with you for your efforts to
put together the Yoder Newsletter. Every issue is fascinating to read.
I hope my information is of interest to you. -- Dwight Yoder Rancho
Palos Verdes, CA

Barbara Yoder on the Left, Joseph Yoder on the Right, Dwight Yoder
in the middle (holding a hardbound Yoder Newsletter) 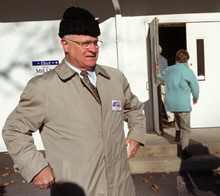 Noted Yoder Historian Dr. Don Yoder is leading a
PENNSYLVANIA GERMAN HERITAGE TOUR
from May 14 to May 29, 2002.
Among the family names listed in the tour guide are Shuford, Foust,
Leinbach, Rudisel, Dellinger, Seitz,Barringer, Boger, Weidner,
Zimerman, Wissenandt, Wilfong and Hahn. For the Yoder cousins
whom he met at Yoder reunions in Pennsylvania and North Carolina,
he has included a very special visit to Steffisburg in the Canton of
Bern, cradle of all American Yoder families (Reformed, Mennonites
or Amish), and a visit with German family researcher Ottmar Jotter.
Major cities to be explored included Frankfurt, Heidelberg, Stuttgart,
Vaihingen/Enz, Tuningen, Freiburg, Kaiserslautern, Bacharach, and
Mainz, and in Switzerland Schaffhausen, Zurich, Bern, Thun, and
Basel. The tour is limited to 40 spaces and half of them are already
committed. For more details, contact Dr. Don Yoder Box 515, Devon,
PA 19333 phone 610-688-9185 or fax 610-989-0976.

After six years of toil the Amish Heritage Foundation of Sugarcreek,
Ohio held an open house in September, 2001,to celebrate the opening
of the John S. Yoder home's public debut. The restoration has been
as authentic and historically correct as we could possibly make it , to
give the visitors a true concept of an 1869 Amish home. The home has
no electricity or plumbing and is situated on an acre of ground near
Beachy's Country Chalet Restaurant. The home was moved from its
original site amid a 172 acre farm from which downtown Sugarcreek
was platted, circa 1872. the home will be open to the public from April
to November, 2002 and will be staffed by Amish guides steeped in
local Amish history. A nominal tour fee will be charged. We welcome
any and all visitors . Hours of operation uncertain, but could be
checked in advance by calling BEACHY'S COUNTRY CHALET at
(330) 852 4644. ---Blaine F. Miller, Secretary /Treasurer

The will of Peter Weisner, of Oley, Philadelphia County.
Written/filed (?) November 24, 1738 (?). January 18, 1738 (?).
Document F.82. It shows his father as named Henry, mother Sybylla,
a sister Anne Marie and brother David. The Executor was Hennrick
Raiser, and witnesses included: Samuel Yodder, Just Yodder (his
mark) and Jacob Nauglee. (Yost (believed OY) and Samuel (believed
OY3- about whom little is known).
Peter's brother David was born c.1719 in the Palatinate,
Germany. He married Maria Catharina Weidner, daughter of Hans
Adam Weidner II and Anna Marie Haass in Berks Co, Pa. He died in
1786 in Berks Co., Pa. Their parents were Henry Weiser who
married Sybilla ______ . He was born in the Bishopric of Worms,
Germany.

(photo printed with permission of Lois and Lemar Mast)

A Photograph of the Yoder barn taken 9-19-1936. The barn consists
of two separately hewn log structures linked with a post-and-beam-
framed center bay. It is one of five barns of this design identified in
Somerset Co., several built as early as 1809. Historians believe this
one was built about 1841.

OREGON YODERS FEATURED IN OMHGS NEWSLETTER- for
two wonderful and detailed articles on the Yoders of Oregon see the
Feb. 2002 newsletter of the Oregon Mennonite Historical and
Genealogical Society. Authors are James Grant Yoder and Joel E.
Daniels (see YNL35).

New TOYODER tailgate stickers for Toyota pickups. (but you can use
them anywhere) Made of Professional vinyl sign material, and last for
many years. Sticks to any CLEAN, non-porous surface like glass,
plastic or painted metal. Easy to cut off the "TO" and have your very
own "YODER" sticker. Colors available: White, Black, Chrome
(Mirror), Gold (mirror), Blue, Red, Hot Pink, Yellow, Aqua (lite
Bluegreen). Overall size 3.67" x 27.2".CAN be removed with some
serious effort. Installation instructions with each order. FREE
SHIPPING! Just send $9.95 (ea) to: Jim Bennett, 13913 Adams Road,
Granger, IN 46530 or Email bennettexpress@yahoo.com 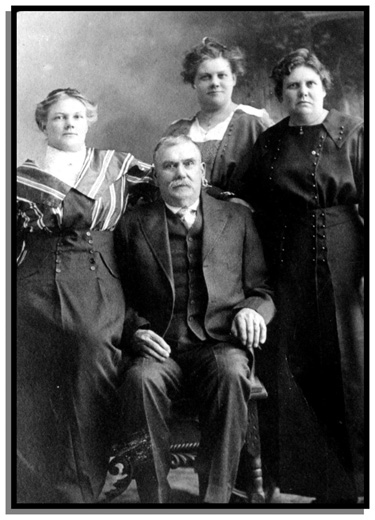 YODER PASSINGS
-Virginia Mae Yoders Boord , 74, (M264534) homemaker, of
Lockhart,Texas, Mrs. Boord was born on August 14, 1927 in
Cincinnati, Ohio, to Rev. Gay Andrew Yoders and Clara Brown
Denny Yoders.
-Pearl J. (Yoder) Rogers, 88, of Cleveland, Tn died Saturday, Jan. 13,
2001, daughter of the late Cordilla Cooley Yoder and Samuel Yoder.
-James Barry "Jim" Yoder, 62, died Sunday, Sept. 16, 2001 of
Kennesaw, Ga. Son of J B James Barry Yoder Sr. and Rachell
Scroggings.
-The Rev. James Franklin "Frank" Yoder, 82, of Athens, McMinn
Co., Tn March 20, 2000, a son of the late Samuel David and Melinda
Cordia Cooley Yoder. He was an active participant in the NC Yoder
reunions.
-Audre J. Yoder Proctor, 87, Goshen, Ind Feb, 19, 2002. Audre was
the daughter of to George and Hazel (Stiver) Yoder. She married
Thomas Proctor in St. Johnsburg, Vt., on Sept. 7, 1939. He is
deceased. Mrs. Proctor worked for American Heritage Publishing
Co. in New York City. Ms. Proctor was a longtime friend of the YNL.
In the 1988 article on her great-grandmother "Rosanna of the Amish"
she wrote: "When Dad was about five years old he cut his leg with an
ax. His grandmother (Rosanna) came to his house and "powwowed";
stopped the bleeding which was profuse. Needless to say, he was a
great believer in this gift of healing, and he had a man in Goshen who
he called to pow-wow for me when I had been hit in the eye and nose
with a golf club and it WORKED, so I'm a believer too."